Olivia de Havilland, who starred in dozens of movies through the 1930s and ’40s, has died at age 104. She died at her home in Paris of natural causes, her publicist, Lisa Goldberg, confirmed. De Havilland was known for playing the good girl — pure hearted, pensive, deeply emotive — during Hollywood’s golden era. But of all her good-girl roles, she’s best remembered for Melanie, Scarlett O’Hara’s sweet foil in Gone With the Wind. Patricia White, a professor of film studies at Swarthmore College, says de Havilland’s Melanie was like a heroine from an 18th-century British novel: full of composure, with an unflashy beauty. 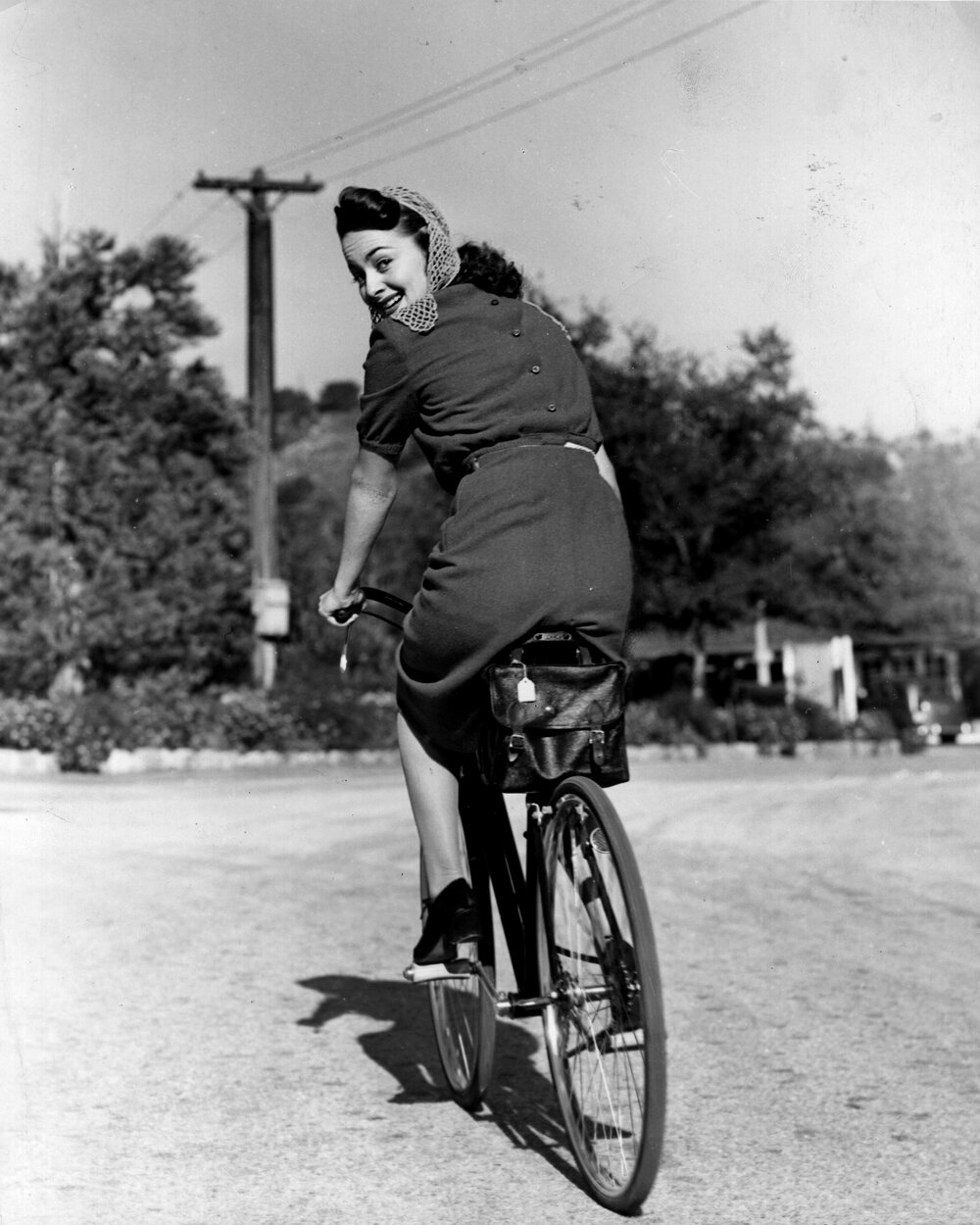 “Olivia really was perfect for Melanie,” White says. “She brings that sort of plain look to all of her viewers, allowing them to sort of see a non-glamorous person, like perhaps themselves, as the heroine in their own stories.”

De Havilland got to that iconic role thanks to a lucky break when she was only 17. She was in a local production of A Midsummer Night’s Dream in Northern California, where she grew up, and that little part earned her an understudy spot in legendary director Max Reinhardt’s production of the play. Gloria Stuart was cast as Hermia, but five days before opening night at the Hollywood Bowl, Stuart’s agent came to a rehearsal. In a 2006 interview for the Academy of Achievement, de Havilland recalled what happened next: “[He] said to Reinhardt, ‘We’re very sorry, but Ms. Stuart will not be able to go on opening night.’ Reinhardt turned to me and he said, ‘You will play the part.’ ” 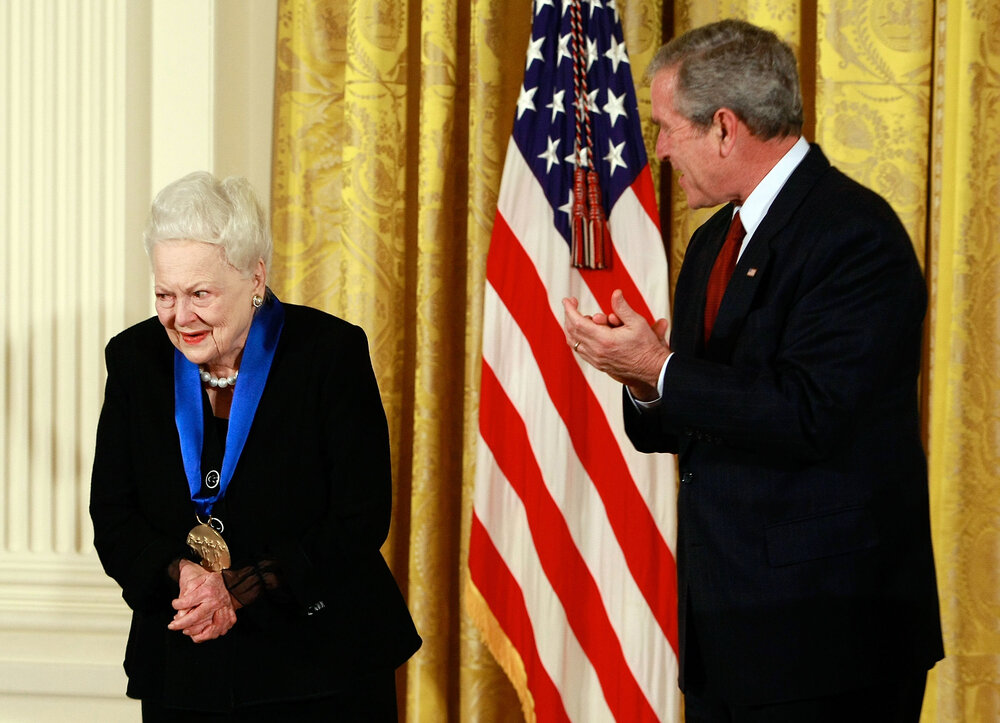 When Warner Bros. made the production into a movie, de Havilland went with it, and so began her film career — right out of high school. She became a contract player for Warner Bros., working 12-hour days, film after film, having to take whatever typecast roles she was given. She was Errol Flynn’s love interest in eight films, including The Adventures of Robin Hood and Captain Blood.

“The life of the love interest is really pretty boring,” de Havilland said. “I longed to play a character who initiated things, who experienced important things.”

“She got a landmark court decision that released her from her obligations to Warner Bros.,” White says. What’s known as the “de Havilland law” was the decision that finally ended Hollywood’s studio system and gave writers and actors creative independence.

“So she was the hero of her own career at that moment,” White says, “and she went on to get roles that did allow her to do important things.”

De Havilland won her first Academy Award for her part in To Each His Own and her second for her role in The Heiress. In that film, her character goes from a fumbling, innocent girl who falls right into the arms of the first suitor who comes by to a cold, disillusioned spinster who’s bitter toward her father for keeping her from the gold digger she loved.

“You hear in her kind of clipped voice — you hear that she’s roiling with emotion underneath that passive demeanor,” White says. “This is the kind of moment that the women’s pictures of the ’40s just lived for: when that mousy heroine would stand up and speak her mind and say what she’d been observing. And she does it beautifully.”

But Warner Bros. wouldn’t give her those roles, and it had her under an ironclad seven-year contract. The decades-old studio system had been challenged in court before, but none of those efforts succeeded until de Havilland sued in 1943 — and won.

But de Havilland lost several other key Oscars in her career: She didn’t win one for Melanie in Gone With the Wind, and in 1942 she lost best actress to her sister, Joan Fontaine. Legend has it, de Havilland never congratulated her sister for her win and they barely spoke again. Fontaine wrote a tell-all memoir portraying de Havilland as a cruel older sister, and de Havilland always told interviewers that the topic was absolutely off limits.

“The biographers have a field day with the rivalry,” White says. “I think a lot of Hollywood women stars are pitted against each other, but they were estranged their whole adult lives.”

This is despite the fact that most of de Havilland’s adult life was spent far from Hollywood. By the ’50s, she appeared in films less and less. She married, had a son, divorced; and when she was 37, in 1953, she left Hollywood for Paris, where she lived the rest of her life. She largely stayed out of the public eye, except when she sued the makers of the FX miniseries Feud for allegedly misrepresenting her in 2017, and appealed the case all the way to the Supreme Court (which declined to take it up).

Back when she was 18, at the screen test with Errol Flynn that would launch her career as a love interest and beyond, de Havilland remembered Flynn turning to her: “He said to me, ‘What do you want out of life?’ And I said, ‘I would like respect for difficult work well done.’ ”

Respect, from those who remember her work, she certainly earned.

De Havilland was married twice, first to screenwriter and novelist Marcus Goodrich and then to Galante. Goodrich died in 1991 at age 93. The actress had one child with each husband.

Her son, Benjamin Goodrich, a mathematician, was just 42 when he died in 1992 after a long bout with Hodgkin’s disease.

Her daughter, Gisele Galante Chulack, lives in Southern California and sat in court on proceedings on behalf of her mom in the “Bette and Joan” lawsuit.