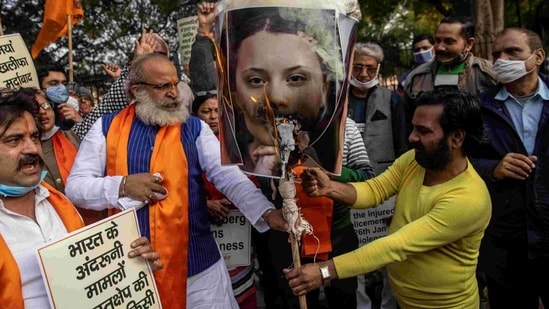 “Disha Ravi, arrested by Delhi Police, is an Editor of the Toolkit Google Doc and key conspirator in document’s formulation and dissemination. She started a WhatsApp group and collaborated to make the Toolkit doc. She worked closely with them to draft the document,” Delhi Police said shortly after securing Disha’s remand.

“She (Disha Ravi) was the one who shared the Toolkit Doc with Greta Thunberg,” the Delhi Police said.

In the process of drafting the document, Ravi and other members of the group all collaborated with pro-Khalistani Poetic Justice Foundation to spread disaffection against India, the police said.

The 21-year-old climate activist was arrested from Bengaluru for being allegedly involved in sharing the “toolkit” related to the farmers’ protest against the three farm laws on social media, police said on Sunday. She is a founder of a group named Fridays For Future and is a graduate with a bachelor’s degree in business administration.

Delhi Police officials had earlier said that Ravi is a key lead in the “toolkit” case as she had admitted during the initial interrogation to editing, adding some things in the “toolkit” and spreading it further.

Earlier this month, the Delhi Police had registered a first information report (FIR) for sedition, promoting hatred among groups and criminal conspiracy under the Indian Penal Code (IPC) on February 4 after Thunberg tweeted the “toolkit” while expressing her support to the farmers’ protest in India.

Last week, the Delhi Police had sent a communication to Google seeking registration details and activity log of the account through which the “toolkit” related to the farmers’ protest was created and uploaded on the social media platform.

The arrest by Delhi Police comes as the ongoing stir by farmers on the borders of the national capital enters the 81st day. Seeking a repeal of the three contentious farm laws, the protesters have been camping on Delhi’s borders since late November last year and have also engaged with the government in 11 rounds of talks to end the continuing standoff with little progress.

Share
Previous PayPal says to shut domestic payments business in India
Next Home Loan Insurance or Term Plan – Which One Should You Get?