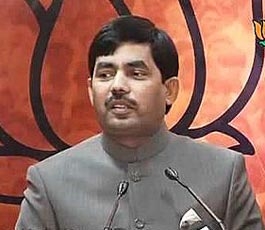 Describing Paul’s hate speech as a law and order matter, Hussain said the issue can not be called an in-house affair of the Trinamool.

It is neither an in-house affair nor a party matter, but a specific law and order matter, Hussain said on the sidelines of a programme here.

He also took a dig at the state’s Trinamool government for not taking any action against Paul.

Somebody is giving threats of murder and rape, a lawmaker is becoming a lawbreaker, and no step is being taken against him. I have never seen such coincidence before.

Hussain said not only Paul, but a number of Trinamool leaders have been using such language.

Across Bengal, people are terrorised after listening to such language, he added.

Paul, an MP from Bengal’s Krishnanagar, has been caught on tape exhorting his party workers to kill Communist Party of India-Marxist (CPI-M) activists even as he himself asserted that he would gun down his rivals and let loose his boys to rape their women.

Notwithstanding the countrywide clamour for Paul’s arrest and expulsion from parliament, the Trinamool has sought to end the matter with an apology which he tendered to his party and the media Tuesday.

Share
Previous Ranveer Singh says that the tunes of his upcoming film ‘Kill Dil’ will be a rage.
Next Delhi government accommodations to be allotted online