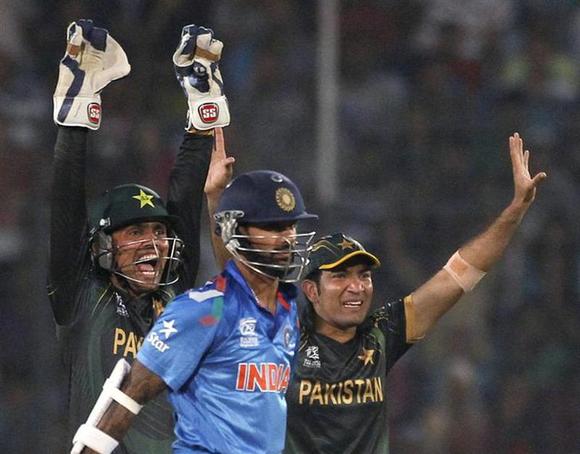 On a wicket that had enough for the spinners, India were rewarded for playing three tweakers. Amit Mishra led India’s bowling as they restricted Pakistan to 130 for seven and then the batsmen ensured that they sailed home to a seven-wicket victory. Thus, India were successful in maintaining their clean slate over Pakistan in World Cups and they didn’t let the Shahid Afridi-heroics of the Asia Cup daunt them ahead of this ICC World T20 2014 contest.

Pakistan’s innings stuttered. It was only Shoaib Malik and Umar Akmal’s partnership that looked assured as they put up 50 in the middle overs. Take that aside and there were a few poor shots, some shambolic running. Kamran Akmal had started very well, but then Ahmed Shehzad sent him back when he called for a tight run in the second over. That began the fall. Mohammad Hafeez also didn’t get going. Malik and Akmal did look in better touch, but Mishra tied them down with some fantastic bowling. Not to forget Ravindra Jadeja who also contributed with one for 18. A score of 131 was modest at best and Pakistan needed a spirited effort to hit back.

India started off their run-chase in tentative fashion. Shikhar Dhawan was uncomfortable with the off-spinners coming early on. In three overs, they could only score seven runs. That is when Rohit Sharma changed things. He moved across the stumps scooped Junaid Khan over fine-leg and then charged to him and hit one over point for six.

Saeed Ajmal was brought on with the surface aiding spin and  Dhawan struggling. And, he did miss the first two deliveries, but then smashed three boundaries to get back into rhythm. While he continued to struggle, India moved along smoothly and past 50. With the score on 54, Dhawan ultimately fell with a short ball forcing him to sky one to fine-leg. India then suddenly lost wickets. Rohit chopped one onto his stumps and then Yuvraj was bowled by Bilawal Bhatti for a solitary run. At 65 for three in 10.1 overs, Pakistan just sniffed a comeback.

But then, Suresh Raina attacked from the outset and although they tried to bowl short, he fought fire with fire.Virat Kohli was as assured as ever as India finished the run-chase with nine balls to spare. They rotated strike and kept attacking the bowlers, not allowing them to settle in. The partnership of 66 off 50 deliveries was just too good for Pakistan.

This win comes as a huge boost for India as they begin their campaign with a victory over the arch-rivals. But, the match did not live up to its billing one would say!

Man of the Match: Amit Mishra.