A venture capitalist in New York City showed symptoms of COVID-19 in March. He explains the nerve-racking story of what happened when his wife and 7-month baby also contracted the virus. It was the call no parent wants to get during a global health crisis.

“I came down with a fever last night,” the nanny said on the phone.

Five days after the nanny’s call on March 10, Clay Dumas, his wife, and their 7-month-old baby were showing symptoms of COVID-19, the illness caused by the novel coronavirus.

In an odd sense, the outbreak in the Dumas home was a release from the paranoia that had been racking Clay’s head for weeks. The rising number of coronavirus cases in the country made him fear that it was only a matter of time before a parent or another family member got sick. As a precaution, the Dumases worked from home and had produce and frozen meals delivered rather than going out.

In that time of suspense, Dumas said, it’s easy to be consumed with worries.

But once the illness descended on the household, Dumas found his thoughts shifting to the future, to the family’s return to health and the different life they would then build.

“When we actually got sick, it sort of accelerated my thinking,” said Dumas, who invests in climate startups at Chris Sacca’s fund Lowercarbon Capital.

Now that the family has recovered fully from the coronavirus, Dumas, a venture capitalist, said he has stopped worrying about getting sick. The risk of reinfection is not yet understood but is thought to be low. For Dumas, it means he can focus on what’s next for his family in a world rocked by a pandemic.

And he can look back on his recent ordeal with the knowledge that everyone was going to be OK.

Back in January, the first coronavirus cases outside of mainland China were confirmed. Dumas and his wife, who asked not to be named, started talking about renting a house somewhere outside of New York City as the disease spread. But their jobs made it hard to orchestrate a move and find childcare.

So they decided to stay. In less than two months, the number of coronavirus cases exploded in the New York region, making it an epicenter of the pandemic.

His wife got a fever, then Dumas and the baby a day later. The two parents were “fortunate,” Dumas said, because of their staggered symptoms. He handled caring for the baby when his wife’s fever spiked, and she took over when his fever worsened.

Even though his fear had been realized, Dumas said he wasn’t “freaked out.” The information available at the time caused him to believe the disease was more inconvenient than potentially deadly.

At the time, only a handful of children in China had been diagnosed with the virus. All of them had mild symptoms.

“It was still early enough that the prevailing storylines were still, people that are relatively healthy don’t have anything to worry about — and that children don’t get it,” Dumas said.

But a few days after the onset of the disease, Dumas said, he checked the baby’s temperature just before putting her to bed. It had spiked to 103.8 degrees, causing the parents to panic. They gave her Tylenol and cooled her wrists and ankles with a damp cloth to break her fever, and it worked.

Dumas’ wife and baby recovered from the disease after experiencing mild symptoms for five to six days, he said. 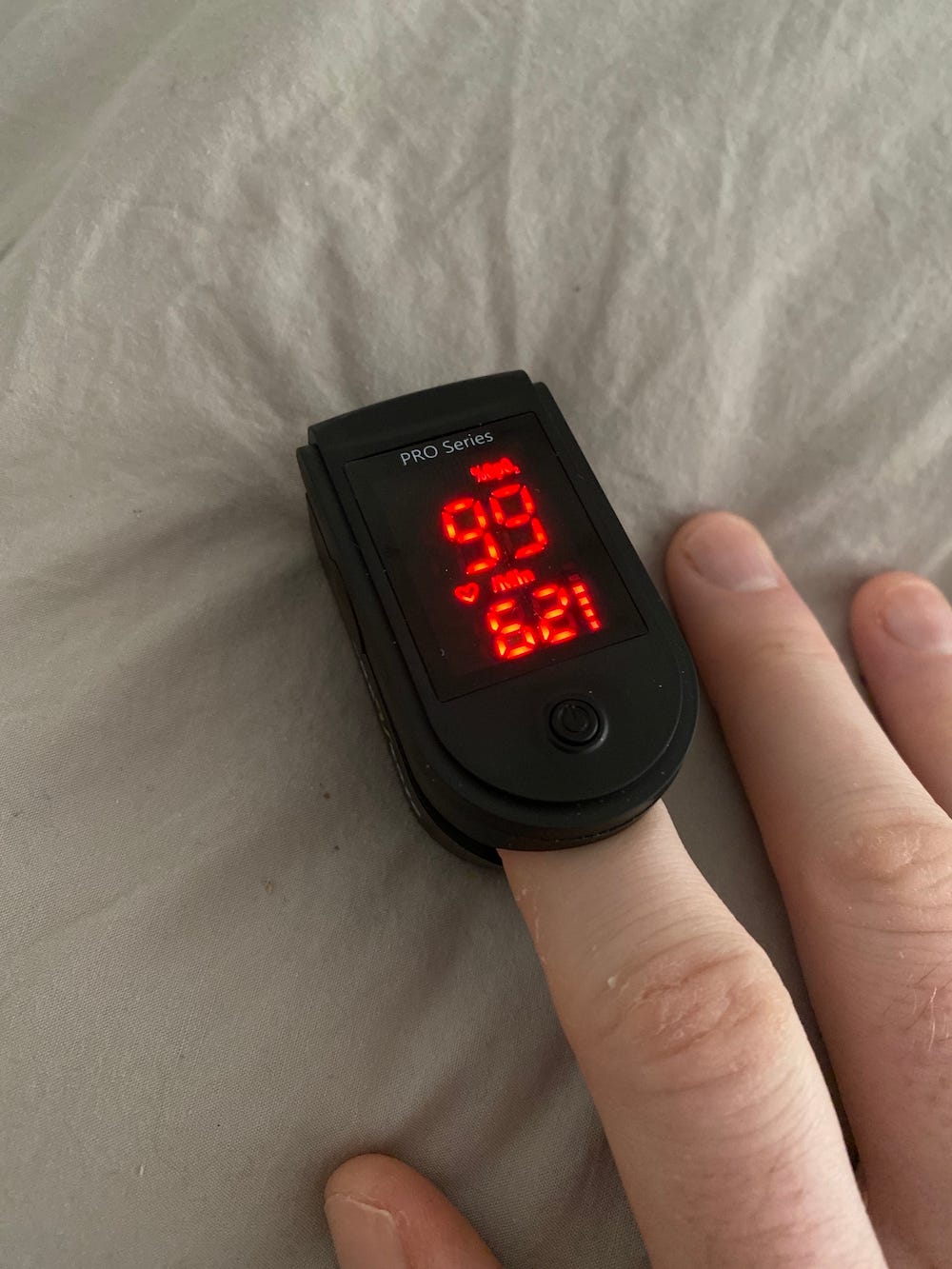 Dumas said his symptoms, mostly a fever and fatigue, went on for 15 to 20 days. He tried to keep working remotely, but later, he couldn’t stay awake for more than three hours at a time — “just being upright was exhausting,” he said. Sleep gave him relief from the aches.

Dumas said he passed his waking hours “reading compulsively about COVID-19, which is not the healthiest thing to do.”

He read news articles and followed a bunch of biologists and epidemiologists, who specialize in the study of diseases, on Twitter. He acknowledges that the social app adds to the spread of misinformation, but he likes that it also helps well-informed people quickly share knowledge and present their analyses.

A positive test and then, relief

During his lingering illness, Dumas said, he only left the apartment to pick up food deliveries on the stoop — and to get tested for the coronavirus at a nearby urgent care center.

I just got swabbed for COVID-19 in NY, and the experience leaves me feeling so much more paranoid about America’s ability to get a grip on this crisis.

On the day of his appointment, Dumas walked the three-quarters of a mile from his apartment to the clinic. “There was remarkably little in the way of protective gear,” he said. The staff wore masks as they attended to patients, but he was surprised that they didn’t cover the exam room chair with paper before he sat down. He got a nasal swab test.

“I was prepared for something much worse,” Dumas said. “It’s like a one-second thing where there’s definitely something going up your nose way farther than you would like, but it’s over so quickly it’s not painful.”

It took about five days to get his results, Dumas said, and by then, his condition had improved. He continued to isolate in his apartment for two weeks after his symptoms subsided, to avoid spreading the disease.

He beat the virus. Now what?

Now, the Dumases are making plans for a future wherein they won’t get sick. 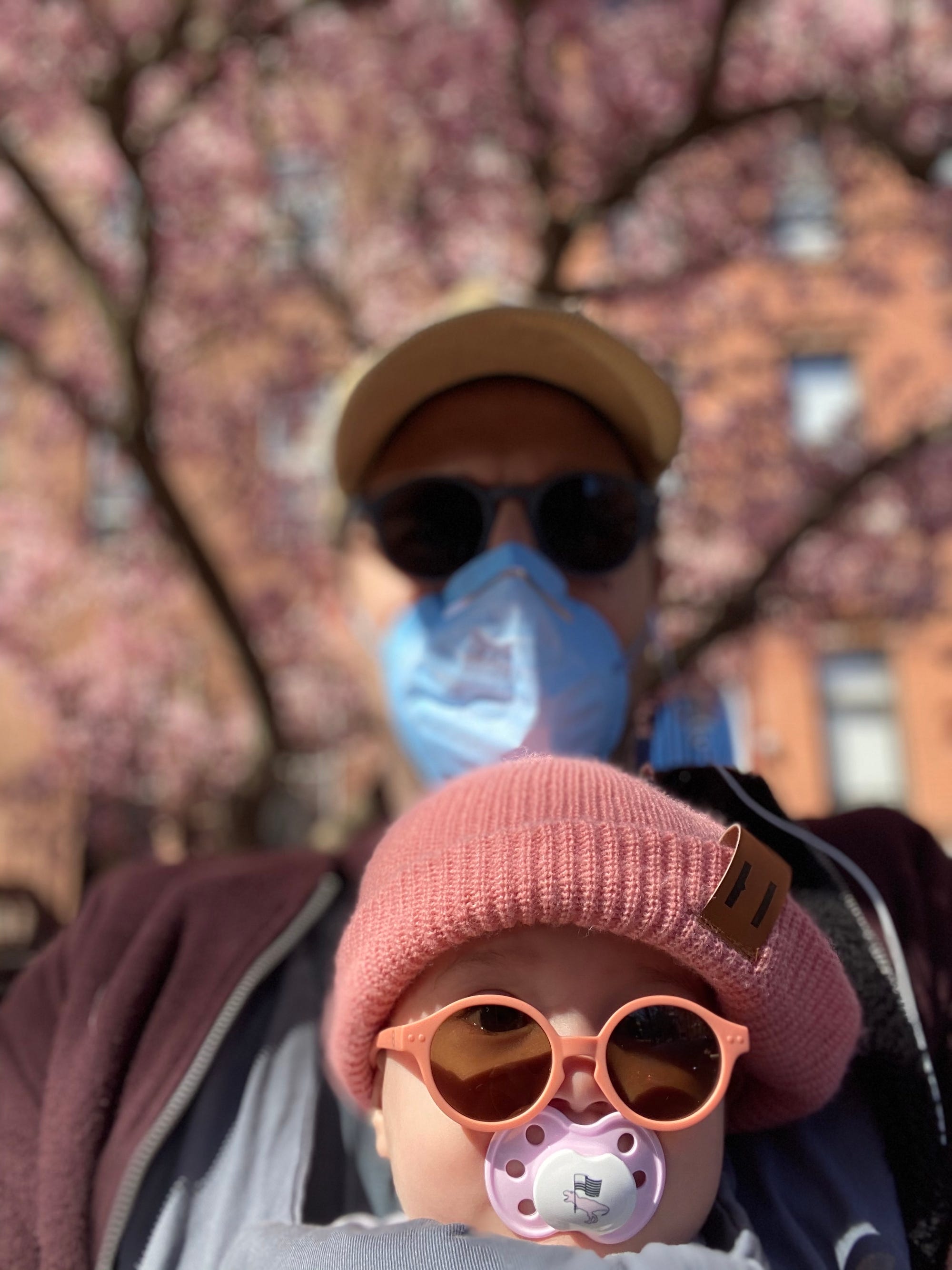 They would like to visit family during the temporary state of immunity they may have developed, Dumas said. His mother-in-law is still working part-time as a nurse in Virginia. Dumas fears that a second outbreak could prevent them from visiting if they wait too long.

“I don’t want to be stuck in a situation where six months from now we can’t go see them,” Dumas said.

The couple also wants to donate blood plasma to help others fight the disease.

A hospital system in New York City is collecting plasma from people who have recovered from COVID-19, and injecting it into patients who are currently ill. The thinking is that the survivors have high levels of immunity in the form of antibodies in their blood, which could lessen the severity or shorten the length of illness in others. Dumas and his wife are still waiting to get appointments.

Dumas said he feels like beating the coronavirus gave him a “superpower.” He wonders what responsibilities come with it.

“Should we pause our jobs and just deliver food to old people?” Dumas said he’s asked himself. “There’s suddenly a new set of questions that I think in some ways you have the luxury to contemplate that you just don’t have when you’re worried about getting sick.”

SEE ALSO: 30 startups creating the future of work that will prosper in 2020, according to VCs

NOW WATCH: What it’s like to get coronavirus in New York City, from diagnosis to treatment and recovery

Share
Previous 'Be a good salesman, talk a big future, mention AI, and he will probably give you money': How the $100 billion SoftBank Vision Fund lost its way
Next Consumer demand for immersive experiences during quarantine could accelerate VR adoption, especially for the entertainment industry