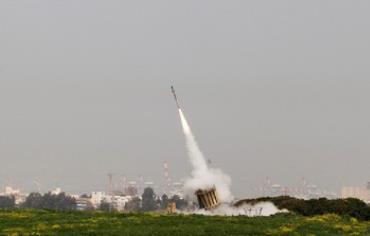 Three rockets were shot down over Asheklon after the rocket defense system intercepted a projectile fired at Beersheba.Another rocket fell in an open area near Ashkelon, and a second one exploded in Sha’ar Hanegev.

Earlier in the evening, the Israel Air Force struck three terror sites in southern Gaza Strip in response to a continuous barrage of rockets fired at southern Israel throughout the day.

“The IDF is prepared to defend Israeli citizens from any threat and will continue to act decisively and as long as necessary until quiet the routine are restored,” the IDF Spokesperson’s Unit said in a statement.

The military placed the onus on Hamas for terror activities emanating from the coastal Palestinian enclave.

Palestinian rocket and mortar fire continued to afflict parts of southern Israel throughout the weekend, with some 30 projectiles falling in areas close to the Gaza border.

A soldier was injured by shrapnel from a projectile in Eshkol on Saturday. Paramedics evacuated him to hospital for treatment.

By Saturday evening, 12 rockets fell in Eshkol and Sdot Negev, and the Iron Dome rocket defense system intercepted a projectile over the town of Ofakim.

The regions of Sdot Negev and Eshkol came under regular projectile fire throughout the day.

On Friday too, Iron Dome batteries went into action. Two interceptions of rockets occurred over Ofakim, and one over Sderot.

On Friday, terrorists in the Strip fired 14 rockets at Israel.

The IAF also struck targets in the southern Gaza Strip on Friday evening in retaliation for the Palestinian rocket barrage that pounded the South.

During the attacks, a home in Eshkol sustained damages shortly before 6 p.m. on Friday. A barrage of rockets targeted Eshkol after 9 pm, with four projectiles landing in open areas, and failing to cause injuries.

On Thursday, a senior military source said that the coming 24 hours would show whether Hamas in Gaza has understood Israel’s message that rocket fire on the South must end.