Popular Indian jewellery brand Tanishq has withdrawn an advertisement featuring an interfaith couple after a right-wing backlash on social media. It shows a baby shower organised for the Hindu bride by her Muslim in-laws.

Critics accused the advert of promoting “Love Jihad”, a term coined by radical Hindu groups to accuse Muslim men of participating in a “conspiracy to convert Hindu women by marrying them”.

However, the attachment of a deeper, sinister motive to them – of “Love Jihad” – is a recent phenomenon.

A section of conservative social media users led calls to boycott the brand, taking it to the top of twitter trends. Many joined in to condemn the abusive posts and comments which bolstered the boycott trend.

The description for the advertisement posted to YouTube read: “She is married into a family that loves her like their own child. Only for her, they go out of their way to celebrate an occasion that they usually don’t. A beautiful confluence of two different religions, traditions and cultures.”

The 43-second ad film – promoting a jewellery line called “Ekatvam” (Hindi word for unity) – has been taken down from Tanishq’s social media channels. The company has not yet responded to the BBC’s request for a response.

The brand first disabled comments and Likes/Dislikes on the advert, posted to Facebook and YouTube. It later removed the video.

MP from the opposition Congress party Shashi Tharoor, who posted the advert to this twitter account, said that “Hindutva bigots have called for a boycott for highlighting Hindu-Muslim unity through this beautiful ad”.

“If Hindu-Muslim ‘ekatvam’ irks them so much, why don’t they boycott the longest surviving symbol of Hindu-Muslim unity – India?” Mr Tharoor wrote.

Most Indian families still prefer weddings arranged within their religion and caste; and marriages outside these boundaries have sometimes led to violent consequences, including “honour killings”.

According to the India Human Development Survey, only about 5% of all marriages are inter-caste and interfaith alliances are even fewer.

India ‘racist’ jewellery ad dropped
The couples on the run for love in India
Viewpoint: India court disregards woman’s right to choose husband
A 2016 survey, Social Attitudes Research for India (Sari), conducted across Delhi, Mumbai, and the states of Uttar Pradesh and Rajasthan found the majority of respondents opposed to inter-caste and inter-religious marriages.

In fact they were in favour of a law banning such marriages.

Gender activists say the onus of upholding tradition, culture and “purity” falls on the woman and if she marries outside traditional boundaries, she is seen as besmirching the honour of her family and the community.

This is set against the backdrop of an India where religious polarisation is increasing. A Hindu nationalist government has been in power since 2014 and is accused by its critics of normalising anti-Muslim sentiment. 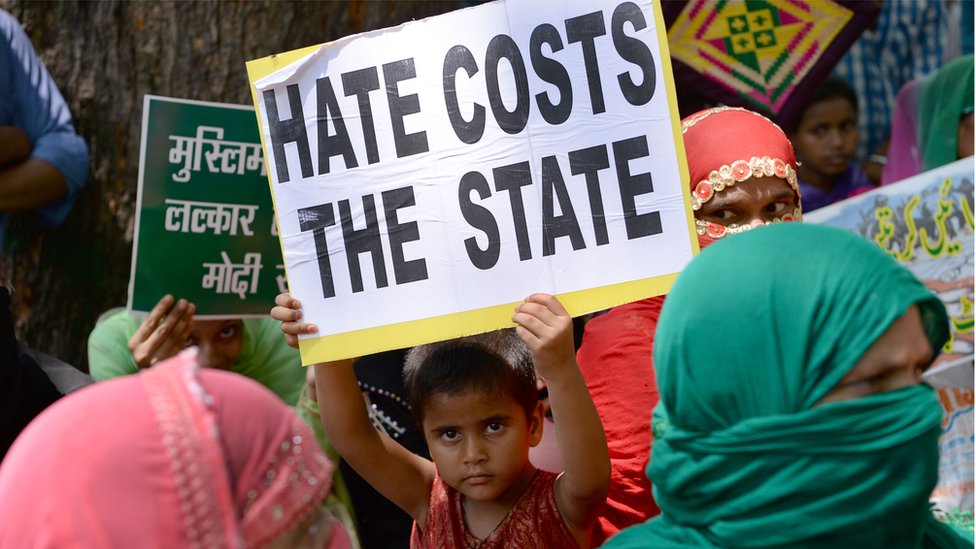 In 2018, a Facebook page calling for violence against 102 Muslim men who are allegedly in relationships with Hindu women was taken down.