(CNN)A swarm of desert locusts clouded the skies in the Indian city of Gurgaon on Saturday, prompting the government of the Indian capital New Delhi to issue an advisory informing officials to remain on high alert. 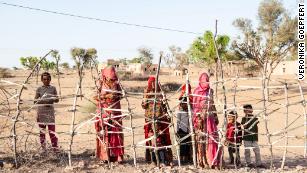 The insects swept through the city at 11.30 a.m. local time (2 a.m. ET), Atul Kapur, the founder of a social enterprise who lives in Gurgaon, told CNN. After 15 minutes, thousands of locusts settled on the terraces and roofs of homes before being swept away by high winds.
The last time Kapur saw a swarm in the city was at least 40 years ago, he said. “As kids we used to call them “tiddi” and [we] would scare them away with loud sounds,” Kapur, 56, told CNN.
In India&#39;s remote villages, going hungry is as big a fear as catching the coronavirus
In India’s remote villages, going hungry is as big a fear as catching the coronavirus
In neighboring New Delhi, the city’s Labor and Development Minister, Gopal Rai, shared an advisory on Twitter, stating that all district magistrates in New Delhi are advised “to remain on high alert” as they scale up efforts to contain the migratory pest.
It added that staff will be deployed to help guide residents and villagers on how to disperse the locusts –perhaps through setting off fire crackers, “making high decibel sound through beating of drum [or] utensil, playing high volume music on music system,” the advisory wrote.
Search for food
This comes weeks after waves of desert locusts — millions strong and stretching up to 7 kilometers (4 miles) long — crossed into India’s western state of Rajasthan from neighboring Pakistan in early May. Swarms have since pushed into five different states in search of food.
The locusts had flown into India from their breeding areas in Pakistan, Om Prakash, a Rajasthan-based plant protection officer for the Locust Warning Organization, said earlier in June.
On June 20, the Food and Agriculture Organization (FAO) of the United Nations said that India should remain on high alert during the next four weeks as “spring-bred adult groups and swarms continue to appear along the Indo-Pakistan border, many of which have continued further east into several states of northern India because the monsoon rains have not yet arrived in Rajasthan, India.”
The desert locust is among the most destructive of migratory pests because of its speed and ability to multiply rapidly. Adult locusts can fly up to 150 kilometers (93 miles) a day and eat their own body weight — equal to 2 grams — worth of fresh vegetation in that period.
East Africa is seeing the worst locust outbreak in decades, after climate change and conflict helped cause the resurgence of the biblical pest. Spraying pesticide is the most effective way of killing locusts, but the coronavirus pandemic has slowed efforts to tackle the outbreak on the African continent.

Share
Previous Coronavirus LIVE Updates: the total number of infections crossed the 4.9 lakh-mark to reach 4,90,401 including 15,301 fatalities
Next I’m on a mission to empower India’s transgender community, one painted palm at a time