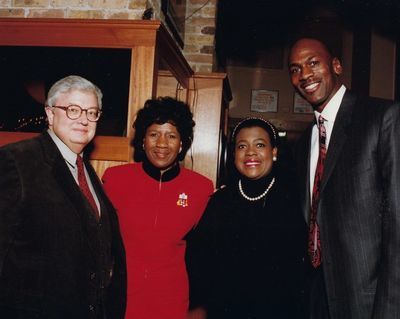 Recently, I had the pleasure of being a guest of Christy Lemire on her Breakfast All Day podcast. She is currently a contributing film critic at Rogerebert.com, and also previously served as a co-host of “Ebert Presents At the Movies.” Usually she joins her co-hosts Alonso Duralde and Matt Atchity discussing films, but being a true sports fan, Christy got caught up in the latest episodes of ESPN’s hugely popular docuseries “The Last Dance,” chronicling the six-time world champion Chicago Bulls of the 1990s. Of course, my Chicago Bulls were led by the still-unmatched Michael Jordan and coach Phil Jackson. Although I have no extensive sports knowledge, other than being a Chicagoan who is obsessed by the championship Bulls, the 1985 Super Bowl Bears, the 2016 World Series Cubs, and the Black Hawks, like everyone else, Christy invited me to recall those golden years.

The episode I guested on ostensibly covers the final two episodes of the 10-part series, but we spoke randomly about things that occurred all throughout the series. Though our conversation can only be viewed by subscribing to the Breakfast All Day Patreon page, I’ve decided to share five awe-inspiring facts about Jordan and the Bulls and The Last Dance that I still find fascinating. However, I encourage you to support Christy’s podcast with a subscription.

Two really important women in Michael Jordan’s life stayed behind the scenes but were instrumental in giving him the stability to go out on the court with laser focus to be his best self: his former wife Juanita Jordan and his mother Deloris Jordan. Juanita was beautiful inside and out, as well as modest, sweet and shy. Both Juanita and Mrs. Jordan quietly took care of helping Michael contribute to many charities and causes in Chicago. In the photograph above, my late husband Roger and I are speaking with Michael and Deloris during an event for the James Jordan Boys and Girls Club and Family Life Center. Roger and I served on the advisory board of directors of the center named in honor of Michael’s father to give back to the community on the Westside of Chicago.

Until watching “The Last Dance,” I had forgotten about the toxicity of the relationship between Jordan and Isaiah Thomas. A little background; before Jordan came on the scene, Thomas was our hometown Chicago basketball hero, as exemplified in Steve James’ classic documentary, “Hoop Dreams.” In the film, Arthur Agee and William Gates aspired to be like Thomas, and they were even recruited to play ball at St. Joseph Academy, the Catholic school that Isaiah attended. Thomas probably would have liked to play for the Bulls, but he was recruited by the Detroit Pistons where he made his name. I imagine it rubbed Thomas the wrong way when Jordan came in and got all the attention, but I don’t pretend to know what transpired between them to sour their relationship so. All I know is that the bitterness of the competitive intensity between Jordan and Thomas came back full force watching “The Last Dance.” If I had a magic wand, I would broker a truce between them. If opposing political pundits James Carville and Mary Matalin can be husband and wife, why can’t Michael Jordan and Isaiah Thomas be friends?

In Chicago, we called Phil Jackson the Zen Master. He was much beloved and the best coach we could have asked for. What I found interesting about “The Last Dance” was seeing Jackson’s rather hippyish background and his interest in esoteric things. In conversations with him, I found him highly intelligent and a good listener. He had a reputation for being a deep thinker. He obviously was a good observer of what made people tick because he was able to understand the psyche of both Jordan and Dennis Rodman, and he knew how to motivate his players.

I still can’t understand why Jerry Krause felt the need to chase Phil away from Chicago. But a good thing for the Lakers that he did because they went on to win five rings. Jackson had a wide range of interests. In 1992 he, along with Roger, participated in a fundraiser called “Chicago Stories” where they wrote plays to be performed by professional actors at the Victory Gardens Theater. The big surprise for everyone was that Jackson’s play was about education and family rather than basketball. In “The Last Dance,” before all the players dispersed after their last championship, he had them participate in a ceremony where they wrote their fears and hopes on paper and then burned the paper in a sacred fire. Could this be a remnant of his visit to the Golden Door Spa?

Michael Jordan and the six-time-champion Bulls team helped to change the international image of Chicago for the better! Prior to Jordan, whenever I travelled internationally, whether to France or Spain, England or Italy, the word “Chicago” would elicit a parody of a machine gun going rat-a-tat-tat, followed by the name “Al Capone.” Ay! It was much nicer to have our city associated with Michael Jordan, and Siskel & Ebert and Oprah. In fact, the whole Dream Team representing America during the 1992 Olympics in Barcelona gave an overall uplift to the image of American athletes that turned them into de facto ambassadors for our country.

When Michael Jordan returned to the Bulls after leaving to play baseball, it was a global story! I remember watching a press conference where an economist had charts showing how Jordan’s presence influenced billions of dollars in the world economy. I had never seen such a thing.

And speaking of Siskel & Ebert, Roger Ebert and Gene Siskel were obsessed with the movies, but they were also avid basketball fans. It is not widely known that Roger started out as a sports reporter before he became a film critic. Siskel frequently had floor seats at the Bulls games in Chicago, just as Jack Nicholson had them at Laker Games in Los Angeles, and Spike Lee had them at Knicks games in New York. One year, when Roger and I were at the Cannes Film Festival, he and Spike Lee were talking trash about the upcoming Bulls vs Knicks game. Spike arranged to get sponsors to broadcast the game by satellite. Julie Sisk of the American Pavilion brought in giant monitors so we could all watch the game in real time at about 2 or 3 am in France. Somehow the room organically divided between Bulls fans on one side and Knicks fans on the other. When the Knicks pulled off a win in the last minute of the game, Spike jumped up on a table and did a victory dance. It was mad fun.

Watch here Roger and Gene’s enthusiasm while reviewing Jordan’s 1996 blockbuster “Space Jam,” in which both critics state that the basketball phenom could potentially have a career in the movies…

Share
Previous Best Restaurants in La Jolla: Where to Eat Now
Next How to Learn a New Language at Home on a Budget