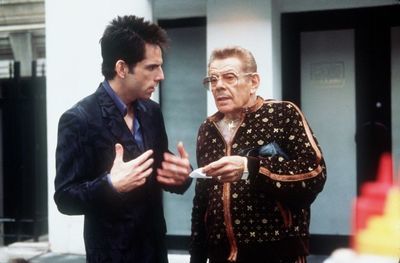 If one were going to make a list that ranked the most inspired casting decisions in TV history, the decision to put Jerry Stiller in the role of Frank Constanza, the permanently apoplectic father of George (Jason Alexander) on “Seinfeld,” would have to rank near the top. Yes, the character may have been sort of one-note, but over the course of the 26 episodes that he appeared on during the show’s nine seasons, he hit that note perfectly every time and became one of its most beloved recurring characters, even serving as the center of some of its most memorable episodes. Hell, one episode involving his character ever helped to introduce the public to the ersatz holiday of Festivus. This, simply put, was the role of a lifetime for Stiller, and it was all the sweeter for having come after a long and respectable career, one that got an unexpected and much-deserved resurgence as a result. Of course, when the news was announced that Stiller had passed away at the age on 92, the tributes focused almost entirely on “Seinfeld” but there was a lot more to his career than just that one role.

He was born Gerald Isaac Stiller in Brooklyn on June 8, 1927 and grew up on the Lower East Side. After graduating from high school and serving in the U.S. Army during World War II, he studied drama at Syracuse University and later at the HB Studio in Greenwich Village. In 1953, he appeared in a staging of Shakespeare’s Coriolanus alongside Jack Klugman and Gene Saks and the three were singled out for praise by its producer, John Houseman, in his memoir. Also in 1953, he met actor Anne Meara, whom he married the next year. The two joined The Compass Players, the Chicago-based improv company that later evolved into Second City. After leaving the group, the two formed an act of their own and by 1961, they were appearing to much acclaim in nightclubs in New York. Throughout the Sixties and Seventies, the duo combined live performances with appearances on a number of variety shows, especially “The Ed Sullivan Show.” Although the duo’s career suffered as a result of the demise of the variety show format in the Seventies, the two continued to forge on—they appeared in a number of radio and television commercials (I can still recall hearing their ads for Blue Nun wine), made guest appearances on any number of TV shows, hosted a monthly show on HBO from 1979-1982 in which they reviewed the station’s programming for the month, and even did a failed 1986 sitcom pilot for “The Stiller and Meara Show” in which he played the deputy mayor of New York and she was a TV commercial actress.

Although Stiller will be mostly remembered for his television work, he also made some memorable appearances on the big screen throughout his career. Following an unbilled bit in the 1970 comedy “Lovers and Other Strangers,” he turned up as one of the cops trying to bring an end to “The Taking of Pelham One Two Three” (1974) and was one of the famous faces caught up in the cheeseball chaos of “Airport 1975” (1974). In “The Ritz” (1976), Richard Lester’s film version of Terrence McNally’s stage comedy, he played a mobster who puts a hit out on his own brother-in-law (Jack Weston). There were appearances but of all his film appearances in the pre-“Seinfeld” portion of his career, the most notable has to be his turn as Wilbur Turnblad, the father of Tracy Turnblad (Ricki Lake) in John Waters’ crossover cult favorite “Hairspray” (1988, pictured above). He doesn’t have the largest part in the film but in the pantheon of teen movie dads, he is one of the great ones. Stiller is corny and goofy as can be (his character does run a joke shop) but he also proves to be a loyal, supporting, and loving figure to his daughter when it counts. He also demonstrated such a convincing rapport with his onscreen wife, played by the one and only Divine, that it never felt like a joke.

After he had his career revival with “Seinfeld,” Stiller began turning up regularly. Following the end of that show, he was cast on another long-running hit sitcom, playing the father-in-law of Kevin James on “The King of Queens”—the last season of the show saw his widower character marrying a character played by Meara. He also turned up on episodes of “Homicide: Life on the Streets,” “Touched by an Angel” and “Sex and the City,” to name just a few, and played himself on “The Larry Sanders Show.” On the big screen, he appeared with his son, Ben, in “The Suburbans” (1998), “Zoolander” (2001, pictured at top), “The Heartbreak Kid” (2007) and “Zoolander 2” (2016). What ever one might think of those movies, his appearances in them were arguably their high points. When “Hairspray” was remade as a full-scale musical in 2007, he turned up in a nice cameo as the owner of the dress shop who hires Tracy as a spokesmodel.

Of the later projects, one of the best—and unfortunately one of the more undeservedly obscure—was “The Independent,” a 2000 comedy in which he had a rare lead role. The film is a mockumentary chronicling the life and career of Morty Fineman, a low-budget independent filmmaker (think Roger Corman sans the rampant profligacy) who is said to have made over 427 films (the titles of which can all be seen during the end credits), as he teams up with his reluctant daughter (Janeane Garofalo) to put together his latest opus, the sexploitation epic “Ms Kervorkian.” The film basically wants to do for exploitation films what “This is Spinal Tap” did for heavy metal bands and while it may not quite equal it in terms of laughs, you still have a genuine sense of sympathy for Fineman as opposed to sneering contempt and much of that comes from Stiller’s surprisingly nuanced turn. Coming up with a copy of this film may be a pain, but I assure you that it’s more than worth it.

As I noted earlier, thanks to “Seinfeld,” Stiller’s place in pop culture history has been set in stone and indeed, when I heard the news of his passing, the first thing I did was post a clip from the show online in tribute. (I went with the Festivus highlight reel posted above.) However, as I hope that this piece has shown, there is a lot more to his career out there that deserves to be rediscovered. And if there is any solace to his passing, it’s that some people may now be inspired to check out some of his other work for themselves. He was one of the great laugh-getters of our time, the kind who could sell even the lamest of material with his sheer force of personality and crack timing. He will be missed.