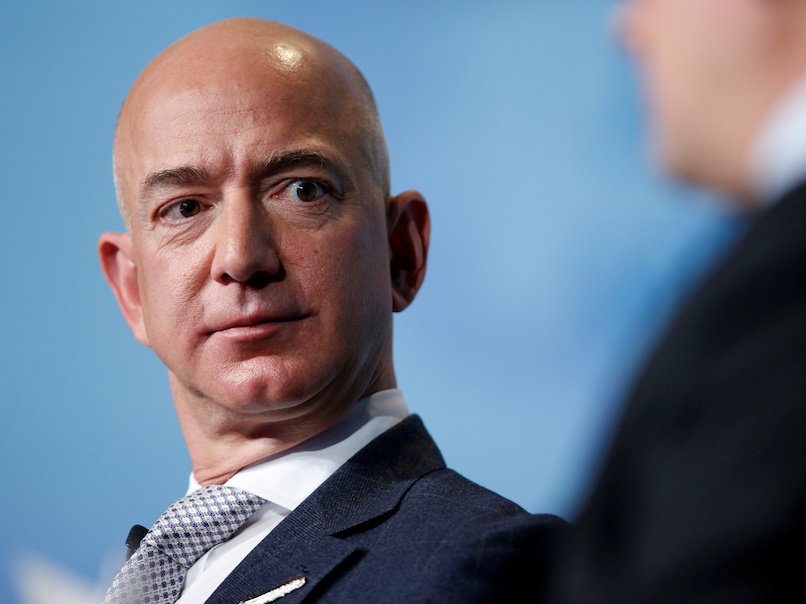 Jeff Bezos may have pledged $10 billion to fight climate change but critics are slamming the billionaire for not making changes to closer to home first and reducing the amount of packaging used to send out Amazon parcels.

“Could he please start with his ridiculous packaging that he leaves on our doorstep??? Perhaps the amazon delivery could collect the significant waste left behind,” one Amazon shopper wrote on Twitter.

“If #Bezos wants to do something for the world, he can start with his excessive packaging. Amazon shipping is the most wasteful of any retailer out there. Is junking up the world with plastics part of #BezosEarthFund?” another wrote.

Bezos announced his $10 billion pledge in an Instagram post on Monday. The money will be donated via a new initiative called the Bezos Earth Fund.

Amazon has frequently been called out for its tendency to use large amounts of packaging to send out small items and there are numerous posts documenting this habit on social media with shoppers sharing images of giant boxes used to house one relatively small item:

@AmazonUK You just delivered to me a slim 1m long boom pole in this massive 1.5x1m box! Gobsmacked by this shocking waste of resources on a planet that is already suffocating. As a huge contributor to packaging waste how can you justify this? #amazon #packaging #waste pic.twitter.com/saC5pwBArg

@amazon you’ve gotta be kidding me with this packaging!!!! What a collosal waste. pic.twitter.com/08hPhOVFbX

Ordered 3x peelers from @AmazonUK last night (because it was a minimum order quantity)… So why did you have to pack them in 3 separate pieces of packaging?! #excessivepackaging #packingwaste #amazon #waste pic.twitter.com/0U1ThOqMU5

@amazon you should probably look into whoever is in charge of packaging. All this box for 1 tiny little pack of lightbulbs the size of a AAA battery. I get boxes like this all the time. Imagine the profits going to waste here. pic.twitter.com/X1NIm3EeN3

In some cases, Amazon customer service agents have responded to customer’s complaints on Twitter, saying that they will look into it:

@amazon you guys must really hate the environment. This is ridiculous. A huge box for a tiny bottle of nail polish? The packaging probably cost more than the nail polish. How do you make money? This should be your corporate initiative this year. Reduce packaging waste. pic.twitter.com/saD3Lz7QD8

A spokesperson for Amazon did not immediately respond to Business Insider’s request for comment on this.

Bezos said that the $10 billion will be used to fund the work done by scientists, activists, and NGOs among others “to help preserve and protect the natural world.”

“Climate change is the biggest threat to our planet,” he wrote on Instagram. “I want to work alongside others both to amplify known ways and to explore new ways of fighting the devastating impact of climate change on this planet we all share.” The grants will be issued from this summer onward.

His announcement comes after mounting pressure from Amazon employees to do more to fight climate change as one of the world’s largest retailers.

In January, more than 350 employees signed a petition that called out the company’s climate change practices and urged Bezos to invest more money into fighting this cause rather than putting it toward his space exploration company, Blue Origin, for example.

“Amazon, the Earth is our only home. Spend more money on fighting Climate Change than on space exploration!” one Amazon employee wrote in the Medium post, which was reported by Business Insider’s Isobel Hamilton.

SEE ALSO: Victoria’s Secret dumped hundreds of bras outside a recently closed store, and it reveals a dark truth about the fashion industry

NOW WATCH: Hugh Hefner’s Playboy empire became an iconic part of pop culture, but struggled to keep up. Here’s what led to the company’s rise and fall.

Share
Previous 11 Best Craigslist Alternatives To Sell Your Stuff
Next From Sheryl Sandberg to Ted Sarandos, here are the high-powered executives who are 2nd-in-command to some of the biggest CEOs in tech