Some of the people who made an early bet on Google's ambitious attempt to revolutionize video games are losing patience (GOOGL, GOOG) 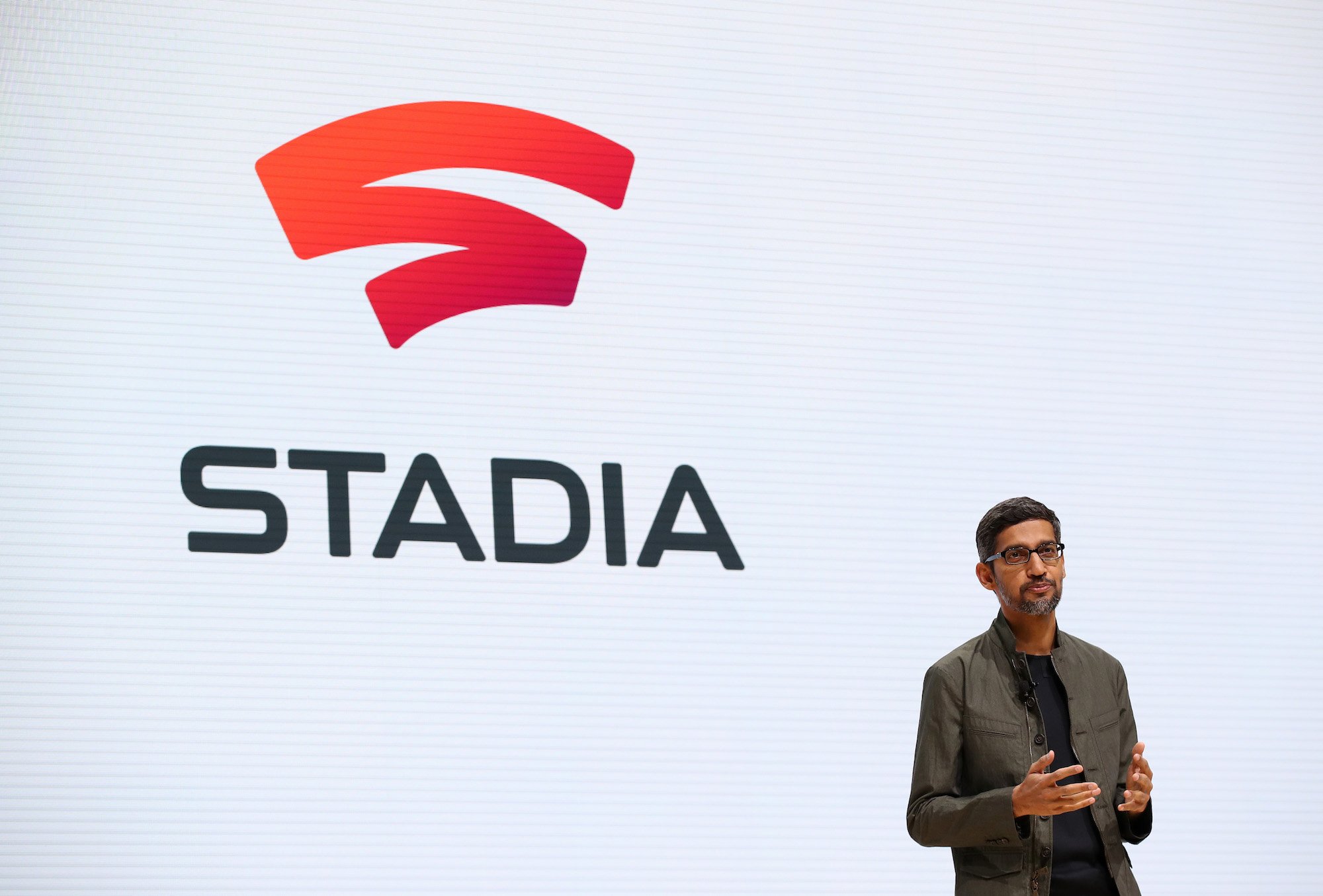 Two months ago, Google made its first-ever major push into the multi-billion dollar video game industry with Stadia — a Netflix-like game service that streams games to a variety of devices, no game console required.

Two months later, and Stadia’s early adopters are starting to revolt. Look no further than the Stadia subreddit community on Reddit for ample evidence.

“I’ve lost a lot of the excitement I had for the service,” said one user. “I’m not really excited because there simply doesn’t seem to be anything to be excited about anymore.”

“It feels like it’s died already,” another user wrote. “For anyone that’s been around for a new gaming console coming out, it’s crazy for the first year of it coming out, huge lineup of games constantly being thrown out, this feature, that feature all being announced…so much fun! Here I am trying to enjoy and justify the $130 I spent on this and I just can’t at this point. We got tricked into being beta testers and it pisses me off.”

Meanwhile, Google has gone largely radio-silent, with no word on when promised features or big-ticket exclusive releases will actually start coming to the nascent service.

So, what’s going on? Why are Stadia’s most diehard, early adopting fans already losing interest?

A different kind of console launch. Google Stadia is not a game console, nor is it a game platform, really — it’s a digital storefront run by Google where you can buy individual games.

Right now, in order to access said storefront, you have to pay $130 up front for the Stadia “Premiere” edition. That comes with a Stadia gamepad, a Chromecast Ultra streaming device, and three months of access to Stadia “Pro” — a monthly subscription service that provides free games each month, enables users to stream games at ultra-HD 4K resolution, and offers a few other bells and whistles.

In so many words: The only way to play Stadia games when it launched in November was to spend $130 upfront. That remains the case in mid-January, despite Google’s promise that a free version of the service will launch this year.

With Stadia, you don’t need a box, nor do you need a Chromecast Ultra or Stadia controller. You can play Stadia games on any laptop with the Chrome browser installed, and you can connect whatever gamepad you want. Heck, you could just play with keyboard and mouse if you prefer.

So what are you paying $130 for, other than a few devices you don’t need? You’re paying for access — access to the Stadia ecosystem, where you then buy each game individually. $130 for access to a game store — a game store largely filled with games that are already available on other platforms, sometimes for less money — is a hard sell.

It’s an especially hard sell with the kind of folks who buy game consoles at launch: Gamers who own current game consoles; who own many of the games on the launch list; who are distrustful of new entrants into the video game industry.

But tens of thousands of folks jumped in regardless, and the most dedicated of those early adopters can be found on places like Reddit’s Stadia subreddit and the official Stadia Discord channel.

These folks represent the most dedicated Stadia users.

They write glowing threads about their first experiences with the service (“I am satisfied with my purchase…my experience has been excellent and I’m excited to see what the future has in store for Stadia.”), and about bizarre use cases that demonstrate the promise of game streaming services.

Some are even gaming PC owners who talk about about how surprised they are that streaming games look as good as games that run locally. “I was actually shocked and was sure my games looked better on my PC,” they said.

But these folks — who were not only willing to take a chance on a new game service from Google but who participate actively in that service’s community — are also starting to get frustrated.

And there’s one reason for that: A lack of updates.

Two months after launch, Stadia still has a small game library and is missing many key features. There’s no way to voice chat on Google Stadia — a stock-standard part of the PC, Xbox, and PlayStation online gaming ecosystems, and something that even Nintendo has started to come around to with its Switch console.

“What’s going on there?” one Reddit user wrote in the Stadia subreddit. “How can it be that there is still no chat in Stadia?” Moreover, there’s no word on when a voice chat function is coming.

Both Microsoft’s Xbox 360 and Sony’s PlayStation 3, which launched over 10 years ago, had voice chat functionality built in from the start.

There is no operating system or dashboard on the service, and there’s no way to use the Google Stadia controller wirelessly on a computer or with a smartphone — it has to be connected with a wire. If you have an iPhone, Stadia doesn’t work there yet, and the same thing goes for most Android phones; the only smartphone supported are Google’s Pixel line. Even if you pay for the Pro version of Stadia, which is supposed to stream games in the highest 4K resolution, games played through Chrome don’t stream in 4K.

That’s before we start talking about promised features of Stadia that differentiate it from the competition, much of which isn’t implemented.

Google said you could watch a YouTube video of a game and, simply by clicking a button in the video, jump right into that game on Stadia. That has yet to materialize, nor is it clear when that’s coming.

Thus far, Stadia is digital storefront that sells you games. Many of the platform features that people expect with a game platform are still missing, with no official word on when they’ll actually drop.

Since launching in November, Google has said and done very little to update the experience — and it’s still missing major features that were announced in March 2019.

“When Stadia launched in November, we delivered a great gaming experience for players, and we continue to work toward our long-term vision for the future of gaming,” Google representative Patrick Seybold told Business Insider in a statement. “Stadia is an evolving platform, and we’ve been busy in the two months since launch adding great content, features and ways to play.”

Specifically, Seybold identified six key ways that the service has improved since launch:

He also highlighted four key updates coming to Stadia in the first quarter of this year, including additional Android phone support.

It remains unclear when Stadia will support Apple devices, or when voice chat is coming, or when the free “base” version of the service will launch.

Of note, Google published a large Stadia update to its community blog on Thursday morning, after Business Insider reached out for comment on this story. We had asked for any form of message from Google for the early adopters who picked up Stadia last November — folks who are increasingly asking when Google is going to say something on the Stadia subreddit.

In 2020, Google is promising “more than 120 games” — including more than 10 exclusive games in the first half of the year. But will early adopters stick with it?

Google is promising a much bigger 2020, with “more than 120 games” scheduled to launch this year — over 10 of which are said to be exclusive to Stadia and launching in the first half.

Whether that will be enough to keep early adopters interested, let alone attract new buyers, remains to be seen.

The sentiment from early adopters isn’t looking great for Google. For people who bought the Stadia “Founder’s Edition” in November, which came with three months of Stadia Pro, there’s a question to answer in the near future: Will I keep Stadia Pro after the three months runs out, which costs $10/month?

A discussion of who is and who isn’t keeping their Stadia Pro membership paints a grim picture: The majority have already decided to cancel their membership, or are considering cancelling it.

Another thread from a few days ago, titled “Let me be real,” says it all:

“For anyone that’s been around for a new gaming console coming out, its crazy for the first year of it coming out, huge lineup of games constantly being thrown out, this feature, that feature all being announced…so much fun! Here I am trying to enjoy and justify the $130 I spent on this and I just can’t at this point. We got tricked into being beta testers and it pisses me off.”

Share
Previous How To Add Audio Narration To a Powerpoint Presentation
Next Police robots keep malfunctioning, with mishaps ranging from running over a toddler's foot to ignoring people in distress