In a series of tweets on Thursday, Elon Musk revealed new details about his plan to build a city of 1 million people on Mars by 2050.

Musk said he hopes to build 1,000 Starships — the towering and ostensibly fully reusable spaceship that SpaceX is developing in South Texas — over 10 years. That’s 100 new Starships per year.

Eventually, Musk added, the goal is to launch an average of three Starships per day and make the trip to Mars available to anybody.

“Needs to be such that anyone can go if they want, with loans available for those who don’t have money,” Musk wrote.

Not enough to convince you to leave Earth behind?

“There will be a lot of jobs on Mars!” he added. 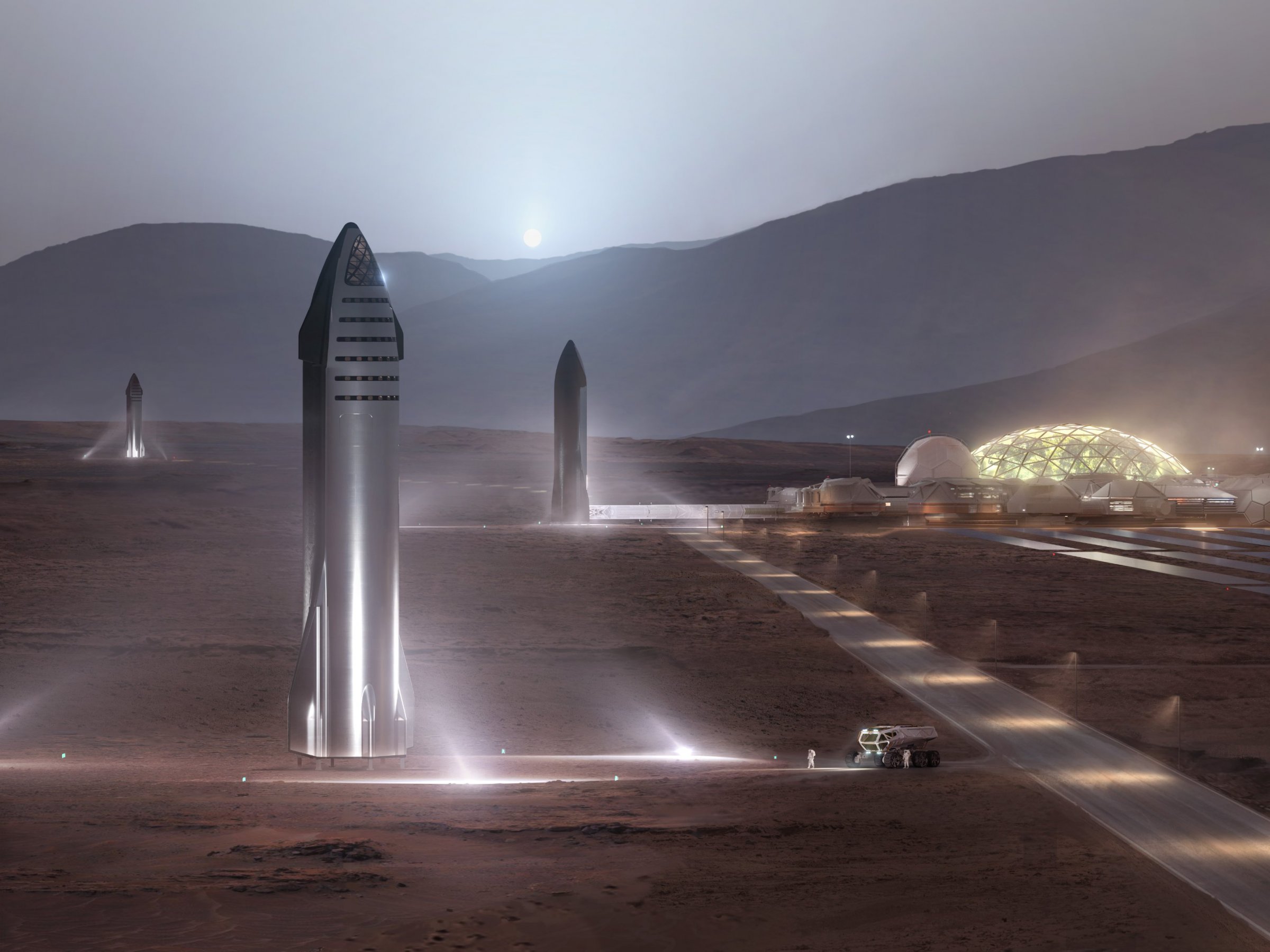 Starship, if realized as designed, would be the most powerful launch system ever created; each launch would pack enough thrust to send more than 100 tons (about seven fully loaded school buses’ worth of mass) and 100 people into orbit at a time.

Musk didn’t specify what, exactly, the rockets would need to carry to Mars, but lots of food, water, building materials, tools, and advanced life support systems are a given. Thus he estimated he’ll need a whole fleet of Starships to build a permanent settlement.

“Megatons per year to orbit are needed for life to become multiplanetary,” he tweeted on Thursday.

In total, 1,000 Starships could hypothetically transport about 100 megatons of stuff to Mars; that’s the volume Musk has said he hopes to send to the red planet per year. With ship ferrying about 100 passengers, that would make for a total migration of about 100,000 people.

Musk also suggested he plans to capitalize on the brief windows of time in which the orbits of Earth and Mars align — this comes about every 25 months. That allows spacecraft to spring off of Earth’s rotation and set themselves on a low-fuel journey towards Mars.

Musk said he would take advantage of that opportunity by “loading the Mars fleet into Earth orbit,” then sending all 1,000 ships on a Mars-bound trajectory over that 30-day window every 26 months.

Loading the Mars fleet into Earth orbit, then 1000 ships depart over ~30 days every 26 months. Battlestar Galactica …

That seems to contradict an earlier tweet in which Musk said 1,000 Starships would fly to Mars each year, rather than every 26 months. Either way, SpaceX has a long way to go before reaching those goals.

A Starship prototype could launch within months

Musk has said a new version of a Starship prototype may launch before the end of March.

“First flight is hopefully 2 to 3 months away,” Musk tweeted on December 27.

The development of the prototype hit delays after an accidental explosion during a fuel-tank pressurization test on November 20, which blew the top off SpaceX’s first 16-story Starship prototype. 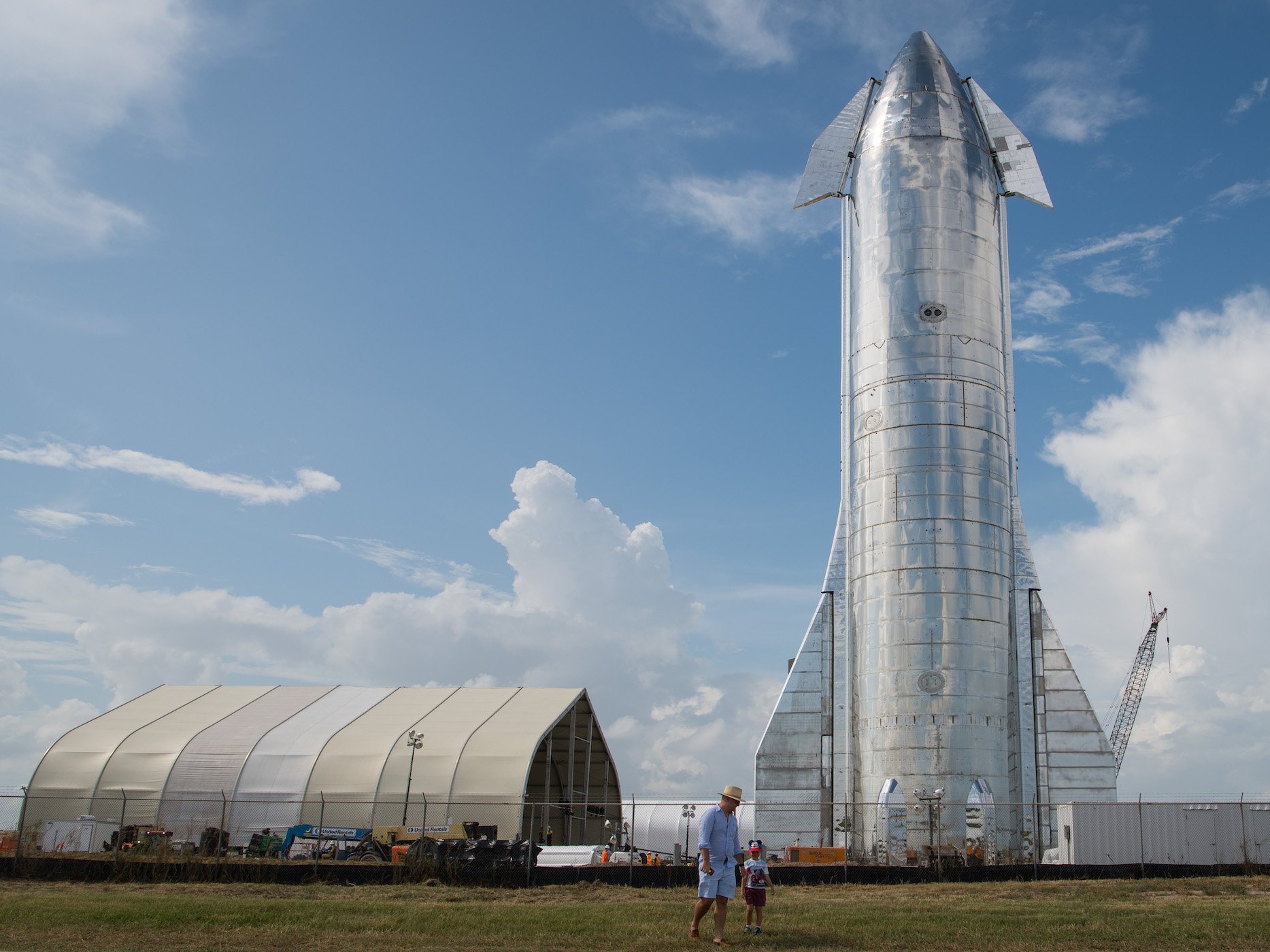 The company could build as many as 20 different prototypes before engineers settle on a “1.0” design to fly cargo and people.

The full Starship launch system would also include a 22-story rocket booster called Super Heavy; combined, the whole thing would stand about 387 feet (118 meters) tall. During launch, a Starship spaceship would ride atop the booster then disconnect after the booster runs low on fuel, and rocket its way into orbit. Both parts are being designed to be fully reusable. If that vision comes to pass, Musk estimates the cost of a single launch would be just $2 million — that would be hundreds of times cheaper than the current cost of launching a similar amount of people and cargo into space on any planned or existing rocket (including SpaceX’s own Falcon 9 system).

Musk said in September that he hopes to launch a Starship into orbit by mid-2020 and maybe even fly a person in it before the end of the year. Gwynne Shotwell, the president and chief operating officer of SpaceX, said during a NASA teleconference that the company is “aiming to be able to drop Starship on the lunar surface in 2022” and fly Japanese tech entrepreneur and billionaire Yusaku Maezawa around the moon in 2023.

However, all of those statements came before the Starship prototype explosion. SpaceX will also have to clear several regulatory and practical hurdles — including securing the safety of residents of Boca Chica Village, which sits within 2 miles of SpaceX’s Texas launch pad — before it can launch any prototypes to orbit.

“Helping to pay for this is why I’m accumulating assets on Earth,” Musk tweeted on Thursday.

DON’T MISS: 10 years ago, the world laughed at private space companies. $25.7 billion later, a new report claims we are at the ‘dawn of the entrepreneurial space age.’