Beijing, 8 March-2014(Reuters): A Malaysia Airlines flight carrying 227 passengers and 12 crew from Kuala Lumpur to Beijing went missing over the South China Sea on Saturday, prompting China to send ships to scour the water for possible wreckage. 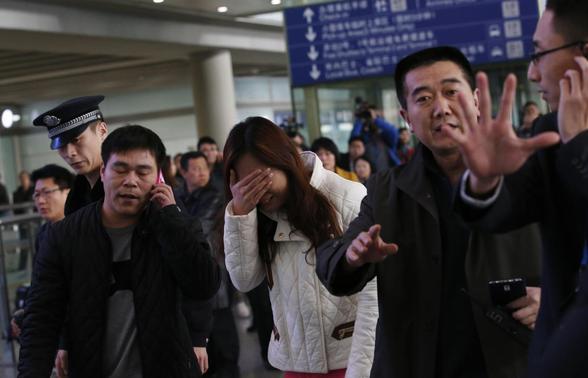 The airline, speaking several hours after the plane had been due to land in the Chinese capital, said it was still too early to say whether the aircraft had crashed. It said there had been no distress signal and it cited early speculation that the plane may have landed in Nanming in southern China.
As news of the disappearance filtered through to distraught friends and relatives who had been waiting for the flight to arrive in Beijing, Malaysia Airlines said it was still investigating and took no questions at a brief news conference.
Flight MH370, operating a Boeing 777-200ER aircraft, last had contact with air traffic controllers 120 nautical miles off the east coast of the Malaysian town of Kota Bharu, Malaysia Airlines chief executive Ahmad Jauhari Yahya said in a statement read to the news conference in Kuala Lumpur.
Malaysia and Vietnam were conducting a joint search and rescue, he said but gave no details. China has also sent two maritime rescue ships to the South China Sea to help in any rescue, state television said on one of its microblogs.
“We are extremely worried,” Chinese Foreign Minister Wang Yi told reporters in Beijing. “The news is very disturbing. We hope everyone on the plane is safe.”
The flight left Kuala Lumpur at 12.21 a.m. (11.21 a.m. ET Friday) but no trace had been found of the plane hours after it was due to land in the Chinese capital at 6.30 a.m. (5.30 p.m. ET Friday) the same day.
“We deeply regret that we have lost all contacts with flight MH370,” Jauhari said.
Malaysia Airlines said people from 14 nationalities were among the 227 passengers, including at least 152 Chinese, 38 Malaysians, 12 Indonesians, six Australians and three Americans. It also said a Chinese infant and an American infant were on board.
If the plane is found to have crashed, the loss would mark the second fatal accident involving a Boeing 777 in less than a year, after an unblemished safety record since the jet entered service in 1995.
An Asiana Airlines Boeing 777-200ER crash-landed in San Francisco in July 2013, killing three passengers and injuring more than 180.
Boeing said it was aware of reports that the Malaysia Airlines plane was missing and was monitoring the situation but had no further comment. The flight was operating as a China Southern Airlines codeshare.
FAILED TO CHECK IN
An official at the Civil Aviation Authority of Vietnam (CAAV) said the plane had failed to check in as scheduled at 1721 GMT while it was flying over the sea between Malaysia and Ho Chi Minh city.
The Boeing 777-200ER has a range of 14,305 km (7,725 miles). While the fate of flight MH370 remains unclear, flight tracking website flightaware.com showed that it flew northeast over Malaysia after takeoff and climbed to an altitude of 35,000 feet.
The flight vanished from the website’s tracking records a minute later while it was still climbing.
If it has crashed, the United States could have a role in any investigation because the plane was built there, said Kelly Nantel, a spokeswoman for the U.S. National Transportation Safety Board.
“We won’t know who would lead the investigation until the location is identified,” she said.
Chinese and Vietnamese media reported that an unspecified signal had been picked up from the plane near Cape Ca Mau, 250 km (155 miles) southwest of Ho Chi Minh city, but a Vietnamese maritime search and rescue official said that was not true.
“We have been seeking but no signal from the plane yet,” Pham Hien, director of a Vietnam maritime search and rescue coordination center in Vung Tau, told Reuters by telephone.
China’s official Xinhua news agency also quoted the Civil Aviation Administration of China (CAAC) as saying the flight lost contact while flying through Vietnamese airspace.
China’s aviation regulators said they had not received any signals from the plane and that there had been no reports of any aircraft crashing in Chinese waters.
Malaysia Airlines said it was contacting the families of those on board flight MH370 and had set up support facilities.
“Our thoughts and prayers are with all affected passengers and crew and their family members,” it said.
Distressed family members of those on board had also begun gathering at Beijing airport on Saturday.
Chang Ken Fei, a Malaysian waiting at Beijing airport for friends to arrive, said: “I got here at seven (a.m.). At first I thought the plane was just delayed as normal, so I came a bit later, I’ve just been waiting and waiting.”
“I asked them what was going on but they just tell us ‘we don’t know’.”