RT reports: India blew up its own helicopter while trying to target Pakistani jets, killing 7

In a scene that could have come right out of ‘Top Gun’, India seems to have knocked its own helicopter out of the sky with a missile aimed at intruding Pakistani jets, according to media reports. 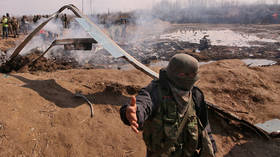 An Indian soldier next to the wreckage of Indian Air Force’s helicopter in Kashmir February 27, 2019 © Reuters/Danish Ismail

A little over a month after Indian authorities claimed that 25 Pakistani fighter jets were detected attempting to breach Indian airspace, sources say a defensive missile fired during the incident may have seriously missed its mark.

India’s Economic Times (ET) reports that the missile was fired shortly before an Mi-17 V5 helicopter on a routine mission crashed, leading to speculation that India accidently destroyed its own aircraft. Six air force personnel were killed in the crash, along with one civilian who was hit by the debris.

“The final moments preceding the crash, including if the IFF (Identity, Friend or Foe) systems were switched on or not, are being carefully looked at to determine what went wrong,” ET reported. Their sources say that it is well within the realm of possibility that a malfunction could have resulted in the targeting systems mistaking the helicopter for a low-flying unmanned attack vehicle. Eyewitnesses also heard a “loud explosion” in the air at the time the chopper went down.

The sturdy $17 million Mi-17 V5 helicopter has not been prone to any serious technical failures. The equipment is also fairly new, the first of the choppers entered into service in 2012.

Aside from looking into possible technical malfunctions with the Israeli-made missile, “highly placed sources” among the air force told ET they are also investigating if any personnel may have been responsible, threatening a possible court martial over the fatal mishap.

The alleged cross-border aerial assault took place a day after an Indian air raid on suspected terrorist infrastructure in Pakistani territory. India has long accused Pakistan of harboring militants from the terrorist group Jaish-e-Mohammed (JeM), who they blame for a car-bombing which killed 44 members of the Central Reserve Police Force earlier in the year.

Islamabad denies that JeM has any infrastructure set up in the areas New Delhi has indicated as possible terrorist training-camp locations, even offering to allow Indian officials to inspect suspected sites themselves.

Share
Previous I drove a $48,000 Chevy Blazer to see if the all-new crossover SUV lives up to its flashy looks — here's the verdict (GM)
Next Here's what it's like to use an Amazon pickup location that's essentially a better version of the post office (AMZN)

The Hottest Wearable Tech and Smart Gadgets of 2016

MakeUp in New York 2015 unveils a series of hot innovations