Abidjan: This is to bring it to the notice of all and sundry, the current development in Biafra land ranging from the past and the recent. 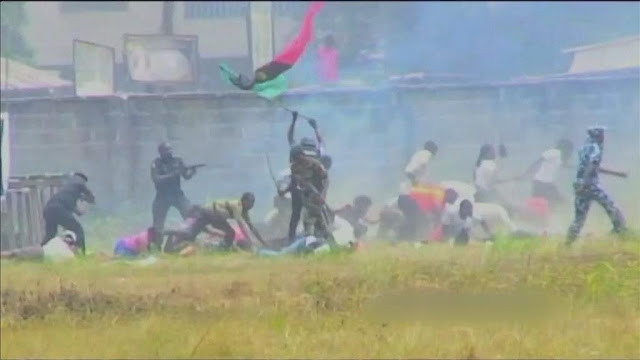 The inhabitants of Biafran nation, otherwise known as the Indigenous People of Biafra located in the eastern part of West African continent has been subjected to continual decimation by the Hausa-Fulani and Yoruba oligarchy.

The Indigenous People of Biafra has been dehumanized, suppressed, marginalized, murdered, disenfranchised, and have been subjected to all manners of inhuman and degrading treatments since the creation and amalgamation of Nigeria in 1914 by the British Lord Lugard, which is prohibited by the UN Human Rights charter.

The amalgamation which was considered as a mixture of water and oil was intentionally set up for some artificial experiments. After the amalgamation, a total life span of 100years was mapped out for the contraption, which completed its cycle in 2014.

In 1960, a ghost independence was given to this British apparatus called Nigeria. I called it ghost independence because Britain is still running the affairs of the Nigerian government till today. They dictate what happens and when it happens in Nigeria. One can rightly say that Nigeria is still in captivity of the British government.

Due to the loyalty of Hausa-Fulani and Yoruba people to Britain, leadership was handed over to them by their slave masters (Britain). As a result, they considered themselves supreme to other tribes and regions in Nigeria. They see the country to be an estate of their forefathers, therefore, they have every right to do anything that pleasantly them with impunity, in as much as they have the support of their slave masters the British government.

The incessant suppression, marginalization and killings with impunity has given rise to the emergence of Nnamdi Kanu, a prince from a royal family, having felt the sorrows and sufferings of his people. He moved from place to place uniting his own people that were divided by Hausa-Fulani and Yoruba evil politicians and media henchmen, and letting them to know the almighty mess they are into. Nnamdi Kanu has educated Biafrans on the importance of disambiguating themselves from the midst of people who doesn’t value thier lives, people that has nothing unique with them not even food, religion, language, culture, or even weather.

Nnamdi Kanu did not stop there. With his own wealth, the selfless man went ahead to open a Radio Station and named it “RADIO BIAFRA LONDON” through which he broadcasts relevant informations affecting his people.

Unifying his people and letting them know whom they are was his treasonable offence, which is why the federal government of Nigeria led by Muhammadu Buhari through his puppet Department of State Security, DSS, arrested and incarcerated him in prison, while scampering for tangible evidences that will enable them to convict him, yet to no avail.
The Biafrans who heard Nnamdi Kanu and followed him have protested for his release in different nations of the world.

The peaceful protesters who came out to the street to protest for the release of their leader in Nigeria were killed in their thousands. On 24th November 2016, Amnesty International reported that at least 150 peaceful pro-Biafran activists were murdered in cold blood, of which about 60 persons were killed in a day.

Upon receiving the Amnesty International report, the federal government led by Muhammadu Buhari through the Chief of Army staff, in their furry has redeployed all the military hardware to Biafran land using their ammunition to intimidate the peaceful Indigenous People of Biafra. The military officials are raping our mothers and our young ladies, killing out young men who dares to speak out on these inhuman and degrading treatments.

This military officers are not capable of confronting the Boko-Harams that are waging war against Nigeria in the northeast of the country, but would quickly rush to Biafra land to raid the houses of the occupants of that area, thereby causing havoc and making the occupants of the area to live in fear.

Just of recently, a young footballer was shot dead and dumped in a pit by the same murderers in the Nigerian military uniform in Biafra land, uptill now, the culprit is moving around killing other innocent citizens with impunity.

The harassment and killings of Biafrans especially those perceived to be members of the Indigenous People of Biafra led by the detained IPOB leader, Mazi Nnamdi Kanu has gotten to a point it should put to a stop with immediate effect.

It will be better for the members of Indigenous People of Biafra to die while defending themselves than to die while trying to maintain unachievable peace in the contraption called Nigeria.
Having been pushed to the wall in a provocative manner, the Biafrans may have been left with no other option than to face the demon of the military eye ball to eye ball, and tooth for tooth.

It has also come to our knowledge that the lives of Biafrans means nothing to United Nations, European Union, African Union and other Human Right Organisations who instituted the laws on which the Biafrans are standing upon.

If they cares, the leader of Indigenous People of Biafra and Director of Radio Biafra London and Biafra TV and other members of Indigenous people of Biafra who acted within the law wouldn’t have still be in prison after one year of no conviction by the Nigerian government and their puppet- the judiciary.

The United Nations, European Union, African Union, and other Human Right Organisations have failed mankind, so regretful and unfortunate that there is no more dispensation of justice in any of the above mentioned organizations.

Therefore, it shall never be called riotous, terrorist act or any word relating to it in whatsoever action(s) that my be taken by the members of Indigenous people of Biafra in protecting their lives and properties.

In the recent statement made by the president of Nigeria in the person of Muhammedu Buhari, he said, “The division of Nigeria will be a very difficult thing.” This simply means that the UN human rights of the Indigenous people are no more effective and cannot be uphold by Nigeria, and Ban Ki Moon, the Secretary to UN remain mute despite all the Human Rights violations committed by Muhammadu Buhari the president of Nigeria.

By now, Nigeria ought to be sanctioned in all ramifications for committing unforgivable crimes against humanity. The continued silence of UN, EU, AU, ECOWAS and other strong Human Right Organisations continue to give birth to higher CRIMES which are being executed with impunity.
In no distance time from now, the members of Indigenous people of Biafra shall respond in full force to the Nigeria military forces who delight in killing innocent citizens.

In the same vein, I also call on the people of Ambazonias in the southern Cameron who are also experiencing the same marginalization, suppression and military brutality in their God given territory to wake up to defend their lives and properties within their territory.

The era of waiting and looking onto the UN, EU, AU, ECOWAS and other Human Right Organisations is over. The lives of Africans worth nothing to the westerners and top African Politicians, the era of dictatorship is over. Therefore, every youth, adult must stand up and get ready for what is to come.

Share
Previous New Era: virtual restaurants will change the way to eat in 2017
Next Malaysia PM urges world to act against ‘genocide’ of Myanmar’s Rohingya