Guwahati, Shazida Khatun: Eid-ul-Adha (‘festival of Sacrifice’), also known as the Greater Eid, is the second most important festival in the Muslim calendar. The festival remembers the prophet Ibrahim’s willingness to sacrifice his son when God ordered him to.Eid al-Adha (Arabic: عيد الأضحى‎ ʿīd al-aḍḥā, [ʕiːd ælˈʔɑdˤħæ]), also called the Feast of Sacrifice (Turkish: Kurban Bayramı; Malay: Hari Raya Korban; Persian: عید قربان‎ Eid Ghorban; Bengali: কোরবানি ইদ Qurbani Eid), the Greater Eid or Baqar-Eid (Urdu: بقر عید‎ baqr `īd; Kurdish: جێژنی قوربان Cejna Qurbanê‎), is the second of two religious holidays celebrated by Muslims worldwide each year. It honors the willingness of Abraham (Ibrahim) to sacrifice his son, as an act of submission to God’s command, before God then intervened, through his angel Jibra’il and informs him that his sacrifice has already been accepted. The meat from the sacrificed animal is preferred to be divided into three parts. The family retains one third of the share; another third is given to relatives, friends and neighbors; and the remaining third is given to the poor and needy. 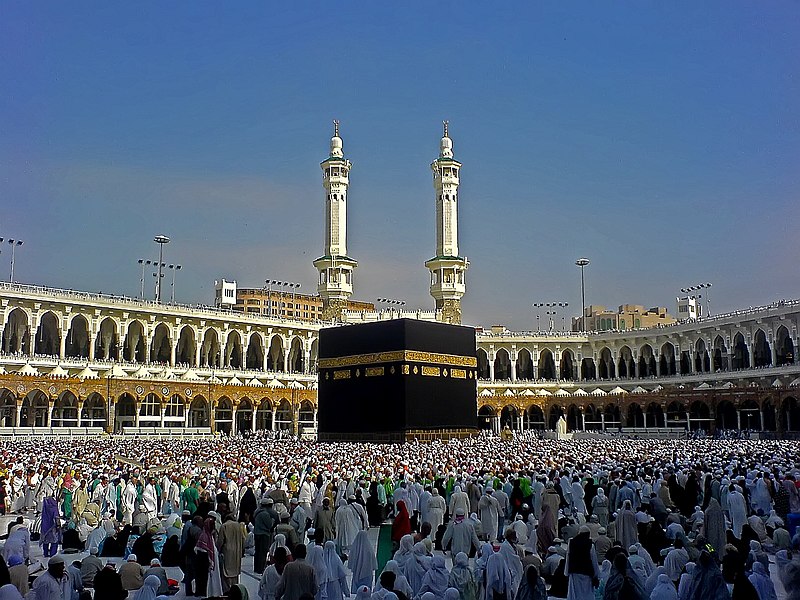 The story of Ibrahim’s sacrifice

Eid-ul-Adha celebrates the occasion when Allah appeared to Ibrahim in a dream and asked him to sacrifice his son Isma’il as an act of obedience to God.

The devil tempted Ibrahim by saying he should disobey Allah and spare his son. As Ibrahim was about to kill his son, Allah stopped him and gave him a lamb to sacrifice instead.

Note: This story is also found in the Jewish Torah and the Christian Old Testament (Genesis 22). Here God asked Abraham to sacrifice his son Isaac, his son with Sarah. Isma’il was his son with Hagar. According to Islamic tradition, the valley of Mecca (in present-day Saudi Arabia) was a dry, rocky and uninhabited place. God instructed Abraham to bring Hagar (Hājar), his Arabian (Adnan) wife, and Ishmael to the Arabia from the land of Canaan.

As Abraham was preparing for his return journey back to Canaan, Hagar asked him, “Did God order you to leave us here? Or are you leaving us here to die.” Abraham didn’t even look back. He just nodded, afraid that he would be too sad and that he would disobey God. Hagar said, “Then God will not waste us; you can go”. Though Abraham had left a large quantity of food and water with Hagar and Ishmael, the supplies quickly ran out, and within a few days the two began to feel the pangs of hunger and dehydration.

Hagar ran up and down between two hills called Al-Safa and Al-Marwah seven times, in her desperate quest for water. Exhausted, she finally collapsed beside her baby Ishmael and prayed to God for deliverance. Miraculously, a spring of water gushed forth from the earth at the feet of baby Ishmael. Other accounts have the angel Gabriel (Jibrail) striking the earth and causing the spring to flow in abundance. With this secure water supply, known as the Zamzam Well, they were not only able to provide for their own needs, but were also able to trade water with passing nomads for food and supplies.

Years later, Abraham was instructed by God to return from Canaan to build a place of worship adjacent to Hagar’s well (the Zamzam Well). Abraham and Ishmael constructed a stone and mortar structure – known as the Kaaba – which was to be the gathering place for all who wished to strengthen their faith in God. As the years passed, Ishmael was blessed with prophethood (Nubuwwah) and gave the nomads of the desert his message of submission to God. After many centuries, Mecca became a thriving desert city and a major center for trade, thanks to its reliable water source, the well of Zamzam.

One of the main trials of Abraham’s life was to face the command of God to sacrifice his dearest possession, his son. The son is not named in the Quran, but most modern Muslims believe it to be Ishmael. Upon hearing this command, he prepared to submit to God’s will. During this preparation, Satan (Shaitan) tempted Abraham and his family by trying to dissuade them from carrying out God’s commandment, and Abraham drove Satan away by throwing pebbles at him. In commemoration of their rejection of Satan, stones are thrown at symbolic pillars signifying Satan during the Hajj rites.

Eid ul Adha is a public holiday in Muslim countries.

Today Muslims all over the world who can afford it , sacrifice a sheep (sometimes a goat) as a reminder of Ibrahim’s obedience to Allah. In Britain, the animal has to be killed at a slaughterhouse.

They share out the meat among family, friends and the poor, who each get a third share.

Eid usually starts with Muslims going to the Mosque for prayers, dressed in their best clothes, and thanking Allah for all the blessings they have received.

It is also a time when they visit family and friends as well as offering presents.

At Eid it is obligatory to give a set amount of money to charity to be used to help poor people buy new clothes and food so they too can celebrate.

Pilgrams on HajjThe Hajj is pilgrimage to Makkah.

It is the Fifth Pillar of Islam and therefore a very important part of the Islamic faith.

All physically fit Muslims who can afford it should make the visit to Makkah, in Saudi Arabia, at least once in their lives.

Every year around 2 million Muslims from all over the world converge on Makkah.

They stand before the Kaaba, a shrine built by Ibrahim praising Allah together.

The Hajjis or pilgrims wear simple white clothes called Ihram which promote the bonds of Islamic brotherhood and sisterhood by showing that everyone is equal in the eyes of Allah.

The Takbir and other rituals
The Takbir is recited from the dawn of the ninth of Dhu al-Hijjah to the thirteenth, and consists of:

Multiple variations of this recitation exist across the Muslim world

During the Hajj the Pilgrims perform acts of worship and they renew their faith and sense of purpose in the world.

Share
Previous Top 10 Smart Teenagers around the globe and Their creativities on Science Fair
Next At least 150 people killed, 400 injured in stampede during Hajj outside Mecca